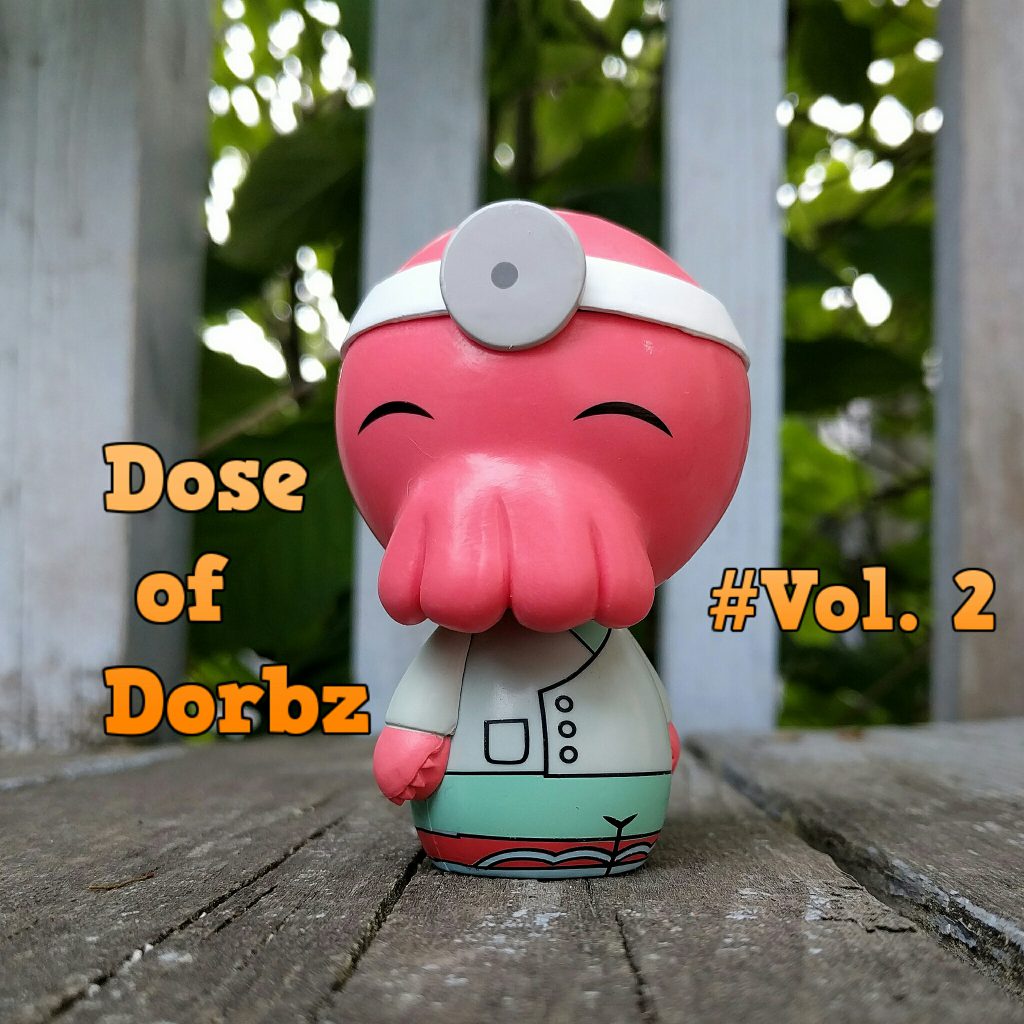 It’s time for volume two of Dose of Dorbz! If you missed the first volume, Dose of Dorbz looks to compile any recent Dorbz news all in one place. We also plan to showcase a different set in each post to show some appreciation to their Dorbz-y goodness. This edition’s spotlight is going to be the Futurama line!

This set – made up of characters from Matt Groening’s Futurama – includes: Fry, Leela, Dr. Zoidberg, Bender and his chase counterpart, gold Bender.

Fry looks great in Dorbz-form. His over-exaggerated hairdo makes him stand out and the simple detailing of his clothes make him unmistakable as everyone’s favourite delivery boy.

Leela also looks fantastic and the extra detail -from the Wrist Lo-jack-a-mater on her right wrist, to the ray gun in her opposite hand – really makes this vinyl figure stand out.

Bender, while the least colourful of the set, definitely captures the spirit of the show’s mischievous Bending Unit and I don’t think any Futurama set would be complete without him.

There is also a gold chase variant of this Dorbz based on the alternate-universe Bender from the episode ‘The Farnsworth Parabox‘. The paint job on this version comes off almost metallic, making the gold ‘pop’, which makes for a great chase piece.

Finally, we have Zoidberg! Funko could have taken the easy route with this figure and just painted his claws and mouth flaps but the fact that they are sculpted in to the mold (along with the addition of the head mirror) are what make this my personal favourite of the set.

Check out a few photos below for a better look!

Let us know in the comments if you’ve picked up any Futurama Dorbz yet or if you think we will see new characters or future variants!

While we haven’t had any new lines of Dorbz announced in the last two weeks, there has been news of some upcoming exclusives, including the first few waves of SDCC goodies!

GameStop will be stocking a Harley Quinn in gown variant. While there is no official release date, you can likely expect with the rest of the Suicide Squad Dorbz set in July.

It also seems that Barnes & Noble will be selling their first exclusive Dorbz with a Gorana variant from Warcraft. Again there is no release date but you can check it out below.

Funko have shown off the first three waves of their San Diego Comic Con exclusives and the Dorbz have looked amazing so far!

First up is the Vanellope from Wreck-it-Ralph in her Candy Cart Dorbz Ridez. The detailing on the cart looks incredible! Does this mean we will be seeing full Wreck-it-Ralph line soon?

There will also be a Batman Returns three -pack that includes Batman, Catwoman and The Penguin – all based on their look from the Tim Burton movie.

The third and final Dorbz SDCC exclusive that has been announced so far is this incredible Alice Through The Looking Glass multi-pack that contains The Mad Hatter, McTwisp, Time & Mallymkun. The next wave of exclusives is to be announced tomorrow so be sure to keep an eye out for that!

That wraps up Dose of Dorbz Vol. 2! Don’t forget to leave us your feedback and suggestions and let us know which Dorbz you’ve picked up recently!