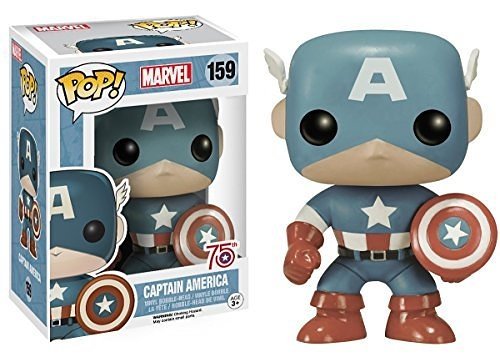 UPDATE: The Amazon exclusive Captain America is now up for pre-order for $12.99.

First up, a Deadpool in a suit Pop! and Dorbz will be exclusive to Previews (comicbook store distributor). No date was given on these so we will update you when we know more!

Spider-Gwen fans will be pleased to know that two variants of the upcoming Pop! are on the way! Walgreens will be stocking an exclusive ‘Unmasked’ version that should be arriving in stores in July, while Hot Topic will be selling the ‘Unhooded’ variant which is set to start showing up at the end of June.

With the 75th anniversary of Captain America coming up, Funko have revealed another exclusive! Described in the video as ‘Sepia’, this light blue Cap will be available exclusively at Amazon.com. The pre-order should be up on the site any day now so keep your eyes peeled!

(ICYMI: Kohl’s will be also be stocking an exclusive Captain America Pop! holding a translucent shield)

Sorry for the terrible picture quality, hopefully Funko will release some glamshots soon so you can have a better look at these upcoming exclusives!