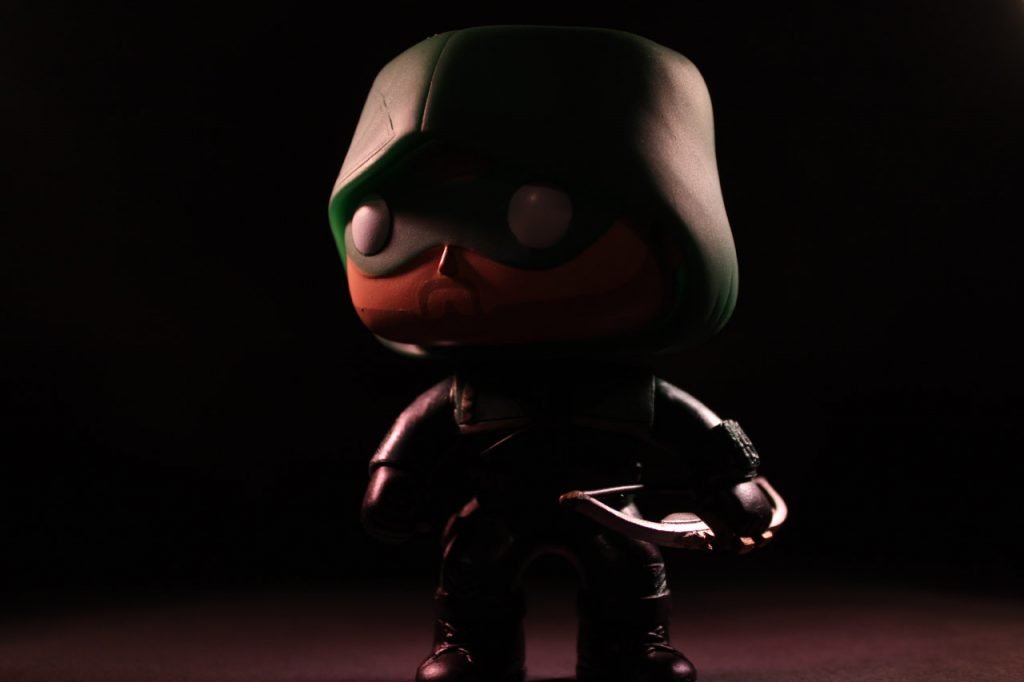 It’s that time again – another Pop review from PPG! Today I’m thrilled to be showcasing the Pops from the hit CW show, Arrow. This show has been a favorite of mine since episode number one, and with season three just coming to a close, what better time to show off these miniaturized, stylized versions of the characters from the show. Looking at the back of the box, you’ll see a slew of characters – Oliver Queen, The Arrow, The Arrow: Unmasked, Black Canary, Deathstroke, Deathstroke: Unmasked, and John Diggle. Before I get into the pics of the four that have been released (Ollie, Arrow, Canary, Deathstroke), I will express a little disappointment in the different Arrow variants. Using the same body for four figures, including Diggle, is a pretty cheap move on Funko’s part. They could have very easily made a Diggle in street clothes and an Ollie in street clothes (or suit, or whatever), and make the line a bit more diverse. Plus…where is Arsenal? And the rest of the villains. We can only hope we’ll see more of those later. Anyway, on to the pics and a few notes.

The titular character, Stephen Amell’s vigilante hero is a really nice figure in Pop form. Nice detail on the outfit and the bow, and the low-laying hood makes for some nice natural shadows, giving the character its necessary dark appearance.

The alter ego of the show’s hero, this is the exact same body as The Arrow, but without the hood.

I’ve been waiting for a Black Canary Pop since 2010! This might not be the fishnetted comic version, but it’s a great version of Sara Lance as the Canary. At least I assume it’s Sara, since the series seems to be focusing on characters from earlier episodes, and in this case, she probably should have just been called “Canary”. (I know…fanboy nitpick) Good detail on the outfit, but she’s fitted with an extraordinarily long neck.

The villain we waited to see in full uniform since the first couple of episodes, this Deathstroke is the real gem of the line. Slade Wilson’s orange and blue clad soldier has great detail in the armor, and a wonderful contrast between the dark and light colors, with the vibrant orange grabbing your attention immediately.

Huge thanks to Entertainment Earth for providing these figures for our review. All four of these are currently available, either In Stock or with a May preorder, meaning they’ll be back in stock at any time. As always, EE offers free shipping on in stock orders of $79 or more, and doesn’t charge on preorders until the items have shipped.