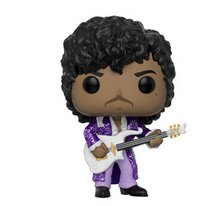 We’d like to introduce the Funko vinyl figure currently known as Pop! Prince. The iconic, purple-clad musician makes his Funko debut as part of a four-piece Pop! Rocks collection. Prince takes on several forms, including Around the World in a Day and Third Eye Girl. That’s in addition to a Glittered FYE exclusive. Pop Rocks: […]

Read More… from Pop! Prince Takes The Stage For Funko