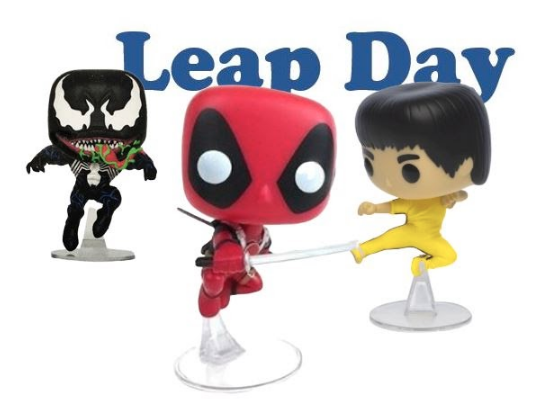 We’re spending the extra day by showing our love for those Pop! Vinyl figures that defy gravity — the ones that leap off the ground and into our hearts.

There are three “leaping” Pop! figures, including Deadpool, Venom and Bruce Lee.

And they owe it all to that little piece of plastic that takes a grounded Pop! and springs it into action.

Some Pop!s hover. Rather their vehicles hover, as does Golden Frieza’s Hoverchair or the Hoverboard that Marty McFly used to elude Biff Tannen.

Then there’s the case of the Pop! Star Wars Speeder Bikes. Which one you ask? Take your pick from Luke Skywalker or Princess Leia to an Ewok or Scout Trooper. That’s not counting the flying abilities of Luke (Landspeeder), Wedge Antilles (Snow Speeder), Rey (Speeder Bike) and the First Order Tread Speeder.

All of which are sent into hyperspeed motion thanks to the technology that is the little plastic stand.

What’s your favorite action pose Pop! figure? Tell us in the comments below.

2 thoughts on “Happy Leap Day, an Ode to Leaping Pop!s”