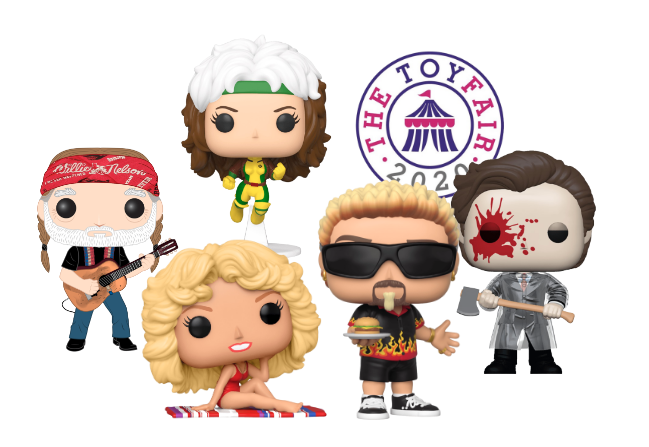 What a week! The London Toy Fair kept us busy during what was another hectic week of Funko reveals.

A look back at the week that was for Funko…

It was an iconic week for Funko’s Pop! Icons collection. Among the five new Pop! vinyls this week are foodie Guy Fieri and Farrah Fawcett, the latter which re-creates her signature 1976 poster look.

This year promises to be another big one for the Star Wars franchise, which celebrates the 40th Anniversary of “Episode V: The Empire Strikes Back.” Funko is in on the party with a collection of anniversary Pop! vinyl figures, including the Pop! Town Dagobah Yoda with Hut.

Staying on the Jedi’s swampy planet is also a training Luke Skywalker with Yoda on his back. The Pop! is one of six new Pop! Star Wars figures arriving out of the London Toy Fair, including Han Solo in Carbonite and Darth Vader (Meditation Chamber).

Naruto shares the Pop! glory with his son, courtesy of Funko’s new line of Pop! Boruto: Naruto Next Generation. The new set comes with six new Pop! vinyl figures dedicated to the Japanese manga. Heading up the collection are the likes of Boruto Uzumaki and Mitsuki (Sage Mode).

Now to the real good stuff. The London Toy Fair opened this week in Kensington and with it arrived close to 200 new Pop! vinyl figures, T-shirts and keychains, and much more.

Masters of the Universe