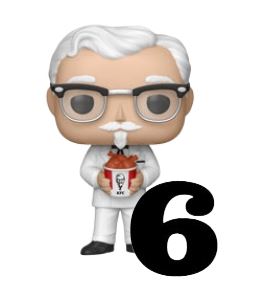 To determine the year’s hottest Pop!s, we deployed an intricate algorithm that was smuggled out of the Quantum Realm by a diverse band of time traveling mutants and cyborgs. But enough about the PPG Data Team.

Turns out, the code is simple. We tallied the amount of times an item appears in both users’ collections (OWN) and their wish lists (WANT) within the PPG database. The results are a swath of our favorite Pop!s from Marvel and Star Wars to Disney and more, including our No. 6 Pop! of the year, according to you, the fans and collectors…

No. 6 – Colonel Sanders (Bucket of Chicken)

When it comes to Pop! Ad Icons, Colonel Sanders (Bucket of Chicken) was finger lickin’ good in 2019. The Colonel easily outpaced runner-up Kool-Aid Man by nearly two thousand in ownership. Third on the list of the most popular Pop! Ad Icons in 2019? That would be Colonel Sanders (Cane)…followed closely by the Coca-Cola Polar Bear.

Visit again tomorrow when we reveal No. 5. Here’s a hint, a familiar face returns to the list. Can you guess? Tell us in the comments below.