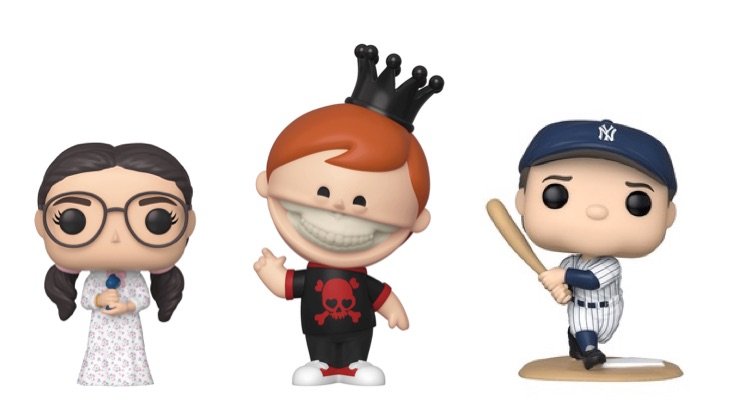 Our man Freddy Funko kicks us off once again, this time as a Ron English NYCC exclusive.

It’s been a busy two days and today promises to be full of more great surprise reveals from Funko as we draw closer to this year’s New York Comic Con, Oct. 3-6 at the Jacob K. Javits Convention Center in Hell’s Kitchen.

Check out all the reveals so far by clicking here.

This is a live blog, so make sure you check back throughout the day as we update the latest from Funko.

Turns out, Suzie is real and now she’s a real Pop! figure as the latest addition to the Pop! Stranger Things family.

From fighting monsters to squabbling with rivals gangs, Funko debuts Pop! Baseball Fury from the 1979 film “The Warriors.”

The mystery continues into the fall surrounding Funko’s new Rick and Morty Pop! figures. The company only released this teaser. Any guesses to whom it might be?

The…ahem…Pop! Butt Stallion makes up for in beauty what it lacks in a name. The Borderlands diamond pony of Handsome Jack makes its Funko debut at this year’s New York Comic Con.

Thanks to his new Glow in the Dark Pop!, the Dark Voyager might have less success when it comes to sneaking up on his Pop! Fortnite enemies.

Cabbages! Get your cabbages! The Pop! Cabbage Man and Cart are on loan from Avatar: The Last Airbender and available as a New York Comic Con exclusive.

Daria doesn’t like to smile unless she has a reason. The animated MTV character might not be smiling, but we’re grinning from ear-to-ear over the introduction of Funko’s Pop! Daria.

Aku and Samurai Jack wage another battle, this time in Pop! Animation form as a New York Comic Con 2-pack.

Dwight Schrute gets his Bobblehead and you get the next vinyl figure in Funko’s Pop! The Office collection.

The realm of Overwatch gets on over-sized protector as Wrecking Ball dons a Biohazard skin for a new 6-inch Super Sized Pop! figure.