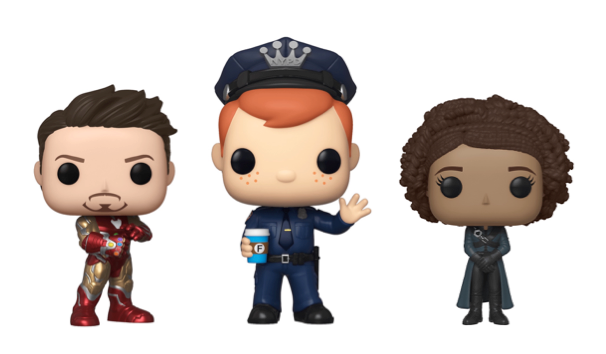 The New York Comic Con is speeding towards us, but Freddy Funko is going to need you to slow down and pull over for a moment. Or else you’ll miss Funko’s busy week of 2019 NYCC Exclusive reveals.

Freddy Funko (NYPD)[NYCC] is among the new vinyl figures announced this week in the run up to the 2019 NYCC, slated for Oct. 3-6 in Manhattan’s Jacob K. Javits Convention Center.

Take a peek at all the reveals from Day 1 by clicking here. And stay tuned for information regarding each item’s shared exclusive.

Check back throughout the day as we update this year’s haul of NYCC Exclusives as they’re announced.

Stepping up to the plate for Funko…Pop! Babe Ruth, who receives a Pinstripe version to compliment his first vinyl figure.Paulie Pigeon makes for a affable Funko mascot at this year’s NYCC with Red, Black and Jersey versions.

Funko gets us dolled up for the Yule Ball in grand fashion…literally…with the introduction of Olympe Maxime (Yule Ball)(6-Inch)[NYCC]. Joining her from the world of Harry Potter is Argus Filch with Mrs. Norris [NYCC].

Funko’s latest foray into Pop! Ad Icons is particularly sweet with new variants of Mimic the Monkey (Red Overalls)[NYCC] and PEZ Girl (Blonde)[NYCC]. Coraline is a treat in PEZ form, including her Button-Eyed Chase piece.