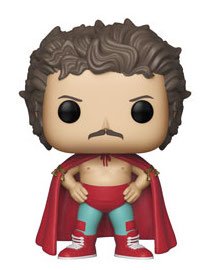 Funko takes us into the ring south of the border with the introduction of Pop! Nacho Libre.

The titular character from the 2006 film of the same name, Nacho parades out two new Pop! Movie vinyl figures, including a masked Chase exclusive.

The opening bell doesn’t ring on Pop! Movies: Nacho Libre until January. But you can preorder yours today while praying that Funko eventually makes an Esqueleto Pop! figure.