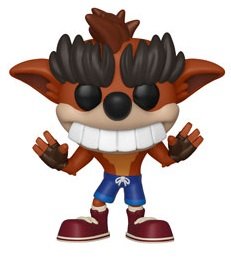 Funko returns us to the Wumpa Islands with the latest addition to its Pop! Crash Bandicoot collection.

Crash with SCUBA Gear and several of his pals make up the new set of four vinyl figures, including a GameStop exclusive Fake Crash Bandicoot.

Pop! Games: Crash Bandicoot hits stores in November. You can preorder yours today.