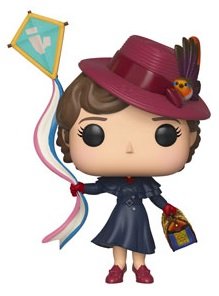 The new version of Poppins — the one portrayed by Emily Blunt in the film due in theaters on Dec. 19 — gets four new vinyl figures, including Bag, Kite and Umbrella (Hot Topic exclusive) versions, as well as a Music Hall rendition.

Jack the Lamplighter rounds out the set.

The Pop! Disney: Mary Poppins Returns magic doesn’t happen until November, but you can preorder yours today.