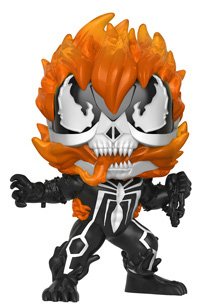 Ghost Rider was once portrayed on the silver screen by Nicholas Cage, but that doesn’t appear to have hurt his appeal as the winner of Pop Price Guide’s recent PPG Poll determining our favorite Venomized Pop! Marvel characters.

Eddie Brock, the Marvel character actually inhabited by the Venom symbiote, is the least favorite out of Funko’s recent Pop! Marvel collection.

Thank you everyone for voting. Please make sure to vote on our latest PPG Poll in which we debate our favorite Pop! Ad Icons Cereal Bowl figures.