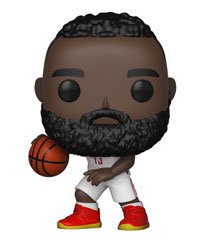 Funko tips-off the 2018-19 season with a new roster of Pop! NBA vinyl figures.

Among those rookies are Ben Simmons, Jimmy Butler, Tobias Harris and the ever-polarizing Lonzo Ball (what no LaVar Ball Pop!?)

Russell Westbrook receives his first solo Pop!, having previously been pitted against Derrick Rose in a 2015 BAIT exclusive 2-Pack.

Also suiting up once again off the Funko bench is Stephen Curry, James Harden and Giannis Antetokounmpo. They join the likes Kyrie Irving and Gordon Hayward of the Boston Celtics, Karl-Anthony Towns and Butler from the Minnesota Timberwolves and the Philadelphia 76ers’ Joel Embiid and Simmons.

Rounding out the collection is Kristaps Porzingis of the New York Knicks.

The action doesn’t get underway until November when the Pop! NBA collection hits the market. But, you can preorder yours today.