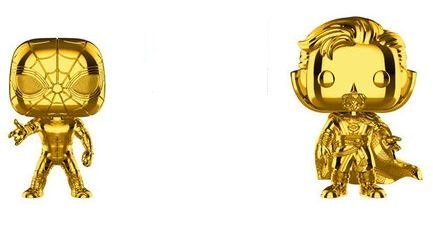 The Iron Spider and Doctor Strange are the winners of Funko’s online contest to determine which superhero it should immortalize next in its Pop! Marvel Studios 10 collection.

The original plan called for the addition of just one hero. But an outpouring of votes for both the Iron Spider and Doctor Strange led to the obvious decision: add them both to the gold chrome series that celebrates a decade of the Marvel Cinematic Universe.

It’s a win-win situation. Unless you’re a bad guy.

Also new to the chrome world is Shuri. The Black Panther heroine joins the roster as a 2018 New York Comic-Con exclusive.

Look for the Iron Spider and Doctor Strange later this winter.