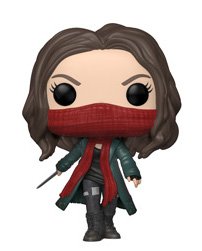 Funko takes us into the realm of “Municipal Darwinism” with its new Pop! Mortal Engines collection.

For those unfamiliar with “Municipal Darwinism,” try to envision what would happen if a city, say…London, for example, could grow wheels and eat other cities. Yes, eat. As in swallow them whole. Watch out, Paris, you know you’re first.

Funko’s latest addition to its Pop! Movies series is a lot simpler in premise.

Hester Shaw (and her Unmasked Hot Topic variant) leads the resistance against Thaddeus Valentine in the post-apocalyptic, Steampunk hellscape that is Earth in the motion picture thriller “Mortal Engines” in theaters this December.

The result is a new five-piece set that also includes Tom Natsworthy and Anna Fang.

The Pop! Movies: Mortal Engines rolls out to the retailers in October, but you can preorder yours today.