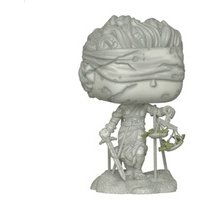 Funko tips the scales in the favor of Pop! Lady Justice with a tribute to Metallica’s “…And Justice for All.”

The cover art mascot for the 1988 album is the company’s latest addition to its Pop! Rocks collection.

She makes a stellar addition to the previously released series of Metallica Pop! figures released in 2017 featuring James Hetfield and Lars Ulrich, as well as Kirk Hammett and Robert Trujillo.

Pop! Rocks: Metallica – Lady Justice doesn’t take the stage until October, but you can preorder yours today.