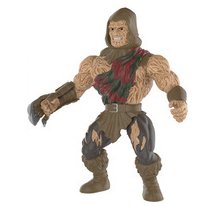 Freddy Krueger, Michael Myers and Jason Voorhees are back, along with Leatherface and Pinhead in the line of action figures that stand 5.5 inches tall and have four points of articulation.

The Horror line is the second in the Savage World franchise, following the 2017 release of Mortal Kombat X action figures.

The fright doesn’t begin until September, but you can preorder yours today.