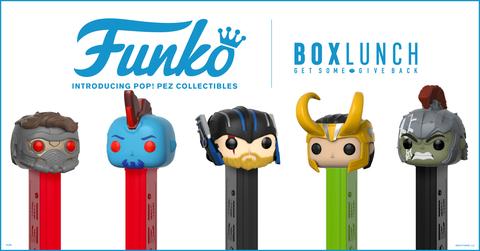 The heads on those Pop! vinyl figures aren’t coming off at the hand of Thanos’ Infinity Gauntlet. They’re simply part of Funko’s Marvel Pop! PEZ collection.

The new series dedicated to the classic candy dispenser will debut during a fan event from 10 a.m. to 4 p.m. on Aug. 25 at the BoxLunch Irvine Spectrum store. Among those from Stan Lee’s universe immortalized as Pop! PEZ characters include: Cable, Hulk, Loki, Magneto, Star-Lord, Thor, Yondu and, naturally, Lee himself.

The Marvel series is the first major addition to the Pop! Pez collection announced at this year’s Funko Fundays.

Also joining the fight on Aug. 25 is Star-Lord, who manifests into a gold chrome Pop! Marvel form, courtesy of BoxLunch.

Anyone fortunate to be in the Southern California area on Aug. 25 is invited to the BoxLunch Irvine Spectrum store for a fun afternoon featuring a meet-and-greet with Funko CEO Brian Mariotti, as well as fun events with Freddy Funko and the Funko Funkast team. That’s in addition to giveaways and raffles, in particular, a life-sized Deadpool Pop! dispenser.

One thought on “Funko Flips Its Lid With Debut Of Marvel Pop! PEZ”