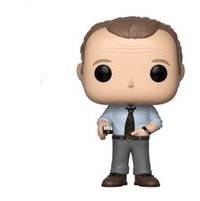 Thanks to Funko’s new Pop! Married with Children collection, it’s now possible for you to own Al Bundy, the man who singlehandedly owned Andrew Johnson High School in the 1966 city championship game with four touchdowns.

Bundy didn’t age well, but the new Pop! Television set is as timeless as it gets.

Bundy’s debut vinyl figure (with hand in pants, naturally) comes with a Target exclusive celebrating the time he trampled “Spare Tire” Dixon for the game-winning score.

He’s not the only Bundy family member with a variant. Peggy Bundy gets a 1-in-6 chase variant, in which the hue of her leopard print changes from green to yellow.

A scantily clad Kelly and Bud Bundy (with a sweet mullet) round out the “with children” part of the six-figure set that’s expected out in November.

Preorder yours today; then grab your remote control, sit on your couch…and wait.