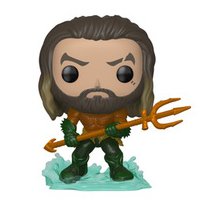 Funko is delving back into the world of super heroes (and the ocean) with its new Pop! Aquaman collection.

Funko has regaled Aquaman with a brand new vinyl figure, but it’s his alter ego Arthur Curry (Gladiator) who gets treated with the Walmart-exclusive patina finish.

The Black Manta receives also twice variants, including metallic and flat black versions from Walmart and Target, respectively. As does Mera, who also doubles-up by donning a gown for GameStop.

King Orm makes his Funko debut to round out the nine-figure Pop! Heroes set.

Funko is also issuing a new collection of Aquaman Mystery Minis with a dozen characters from the upcoming film set to hit theaters in December.

That’s in addition to the pair of Pocket Pop! Keychains depicting Aquaman and Black Manta.

Pop! Heroes: Aquaman takes to the sea (aka the stores) in October, but you can preorder yours today.