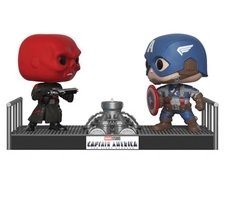 The two archenemies square off in a cinematic memory from 2011’s “Captain America: The First Avenger” that takes right before Red Skull touches the Tesseract and is banished to Vormir where he goes on to become the Stonekeeper. We’re talking, like, right before all that happens.

It’s the second vinyl figure for Red Skull, who made his Pop! debut in 2011.