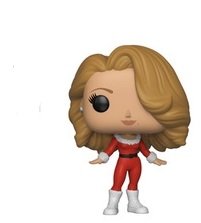 I don’t want a lot for Christmas. There is just one thing I need. And it’s a Pop! Mariah Carey vinyl figure.

The diva is Funko’s newest addition to its Pop! Rocks lineup and is featured in her resplendent Christmas outfit from her 1994 smash hit “All I want for Christmas (and not her 2016 New Year’s Eve ensemble).

Pop! Rocks: Music – Mariah Carey doesn’t hit the stage until October, but you can preorder yours today.