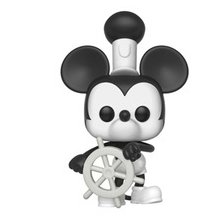 Mickey Mouse has plenty of friends within the Magic Kingdom. But when it’s your 90th birthday, the celebration should be all about you.

Steamboat Willie (with Boat Wheel) highlights a trove of new Mickey Mouse collectibles and is one of six new Pop! vinyl figures depicting him in classic ensembles such as Apprentice, Conductor and Fire Fighter, as well as Brave Little Tailor.

But, the biggest surprise, literally, of the new wave of Mickey Mouse Pop!s is a 10-inch Target exclusive in black-and-white.

Funko is also shrinking Mickey to…well…mouse size with a new Mini Vinyl set of a dozen iconic versions of the Disney icon.

That’s in addition to new lines of Pocket Pop! Keychains and Pop! Pens.

Disney: Mickey’s 90th Anniversary hits shelves later this autumn, but you can preorder your today.