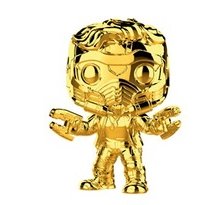 Perhaps all the superheroes of Marvel needed to stave off Thanos was a gold, chrome sheen.

Funko is celebrating a decade of Stan Lee’s genius with 11 new Pop! Marvel vinyl figures featuring some of our favorite heroes reissued in gold chrome.

The company will release its Pop! Marvel Studios 10 figures throughout the year, beginning in August with Iron Man and Loki. Captain America and Dancing Groot arrive in September with the Black Widow and Hulk following a month later.

The year rounds out with Gamora and Thor (November), as well as Ant Man and the Black Panther (December).