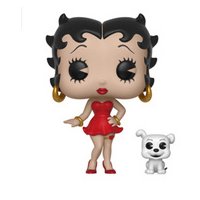 The party that is Funko is about to get a little more happening with the debut of Pop! Betty Boop.

Boop is no stranger to Funko with more than 50 Wacky Wobblers dedicated to the 1920s flapper. She also has a plush doll and a Funkovision diorama, but, until now, never a Pop! figure.

Joining Boop in Pop! form is her trusted pal Pudgy the dog.

The party begins in September, but you can preorder your invitation for a Pop! Animation: Betty Boop now.