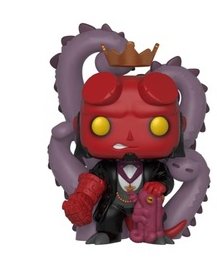 Hellboy has donned horns and no horns, wielded a sword and wore a crown when it comes to his four-Pop! history in the Funko universe.

But never before, however, has the Dark Horse Comics superhero looked so dapper.

Hellboy throws on a suit to celebrate his return to the San Diego Comic-Con, where artist Mike Mignola initially unveiled him back in 1993.

Funko’s Saga collection will expand this summer with the SDCC release of two new characters.

Grab your controller, Funko is adding to its Pop! Games collection with two new figures dedicated to Destiny and Overwatch.

Making their Funko debut in San Diego are Grillmaster Soldier: 76 and Sweeper Bot.