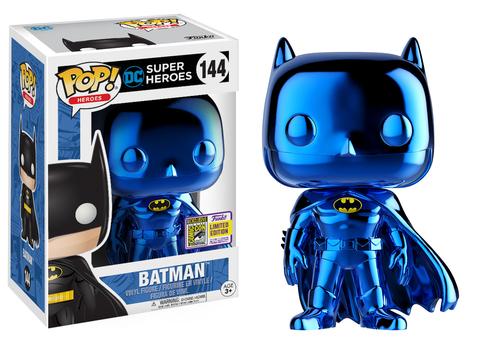 Holy Batman!!! Funko comes out swinging with Wave 5 of SDCC exclusives, and it’s DC themed. They give a little love to quite of few of the lines under the DC franchise. First up, from the kick butt Wonder Woman movie is a Pop! of Ares. If a Pop! of Ares isn’t up your alley, maybe the Dorbz is. The Ares Dorbz is included in a 2 pack with Wonder Woman. Funko is also throwing a little love to last year’s hit movie Suicide Squad with The Joker inspired Batman Pop! Moving on to the highly anticipated Justice League movie, Funko is giving us 2 new exclusives, a Bruce Wayne Pop! as well as an Aquaman with Motherbox Pop! If none of those has got you excited yet, maybe some new Batman Pop!s will. Coming exclusively to Toy Tokyo is a Blue Chrome Batman. Or maybe the Interplanetary Batman with a space helmet Pop! is more your style. If you collect Action Figures, then you may want to check out the Red Batmobile with Green Batman. This new piece is limited to 1500.  Adding to the new wave of Batman The Animated Series is the Man Bat Pop! Rounding out the wave is a 3 pack of the Wonder Twins including Zan, Jayna, and Gleek, and a Dorbz 2 pack of Nightwing and Deathstroke. This 2 pack is limited to 1500 pieces. So how did the DC wave do? Let us know and tune in Friday for wave 6.