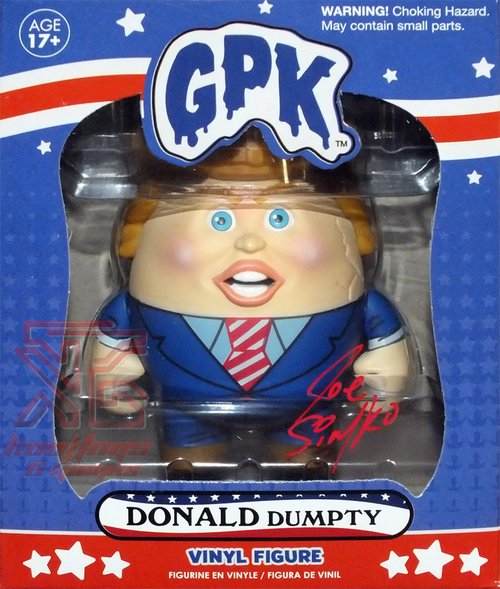 Kool Toys & Games has just announced their latest autographed figure! This newly revealed autographed edition is the Donald Dumpty Garbage Pail Kids vinyl figure signed by artist Joe Simko. There are two different versions available, and both are extremely limited. The limited edition of 75 is signed by Joe Simko, and the limited edition of 60 also includes a hand drawn doodle of Donald Trump with a quote. There are 10 different quotes available. As an added bonus, checking out with the coupon code “poppriceguide” will take $5 off!

The Donald Dumpty vinyl figure is based off the Garbage Pail Kids trading card of the same name. The card, which parodies presidential candidate Donald Trump, was only available for a limited time as an online exclusive through Topps. The figure is approximately 3″ tall and is part of the “really big” Mystery Minis line by Funko.

Kool Toys & Games offers a fun experience with private signings, occasionally specifically for Pops and other figures. Each figure is a limited edition, and everybody gets a COA with it along with a collage of photos from the signings. In addition to Simko, Kool Toys & Games has worked with Paul Blake (Greedo), Michael Carter (Bib Fortuna), and Costas Mandylor (Saw), among others, to give fans authentic celebrity autographs.