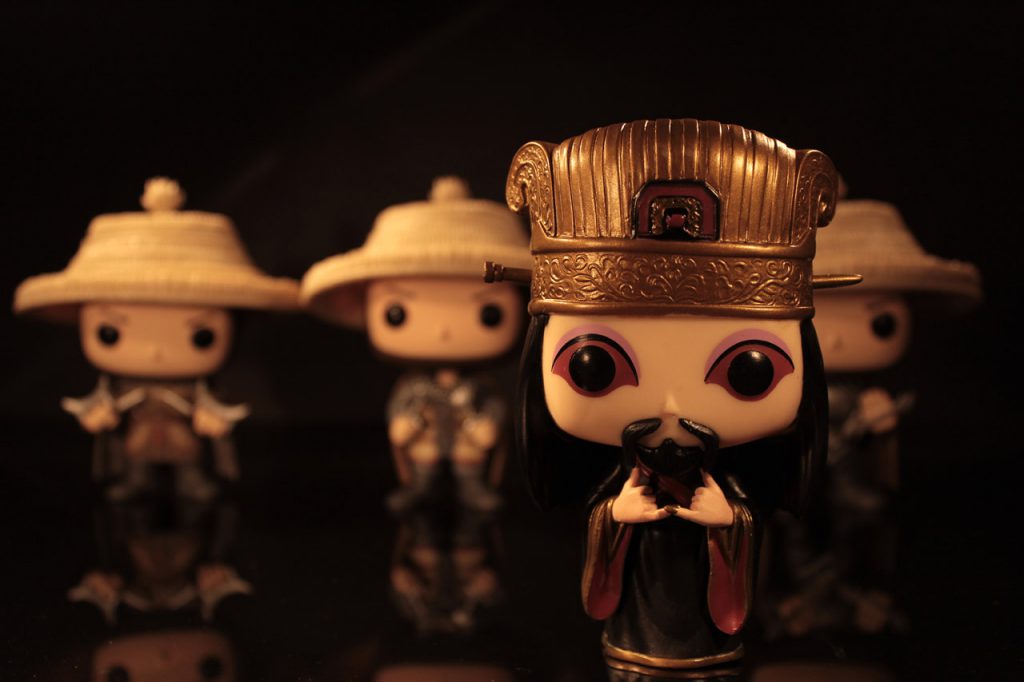 I’m pleased to post another mini Pop review, again thanks to the generosity of Entertainment Earth. This time I’ll be taking a look at the sextet of Pop! Movie figures released from the 1986 Kurt Russell movie, Big Trouble in Little China. This series of Pops includes Jack Burton, Gracie Law, Lo Pan, and the trio Thunder, Lightning and Rain. They appear in the Pop! Movies line and are numbered #151-156.

Kurt Russell’s character, Jack Burton, is the hero and badass of this movie. He is easily the least-detailed of the bunch, but Funko has made a fun Pop of the character, including the detailed artwork of his t-shirt.

Gracie Law was played by the then-sexy Kim Cattrall, and Funko has made a stunning, detailed Pop of her character in her red attire. Her ornate headdress is a very striking green and gold, with fine detail put into the design. The eye shadow and beauty mark do a fine job of capturing this character’s essence.

Lo Pan’s introduction into the Pop line adds another one of the cool villains in cinematic history, and the dark tones mixed with the gold trim and headdress really make it an eye-popping figure. Even better will be the addition of the exclusive Glow in the Dark Ghost of Lo Pan Pop, due to hit in June.

I’ve heard people bitch about how these three figures are “pretty much identical”. BS, I say! Yeah, their heads are the same sculpt, but the details on the uniforms and weapons of choice are far different between the three. They complement each other very well, and with their large hats they are quite heavy for normal-sized Pops.

This is a super cool set of figures, and a must-have for those of us that enjoy 80s movies as much as I do. Entertainment Earth has all six of these available, either In Stock or ready to be ordered (labeled as Temporarily Out of Stock). As always, EE offers free shipping on in stock orders of $79 or more, and doesn’t charge on preorders until the items have shipped.