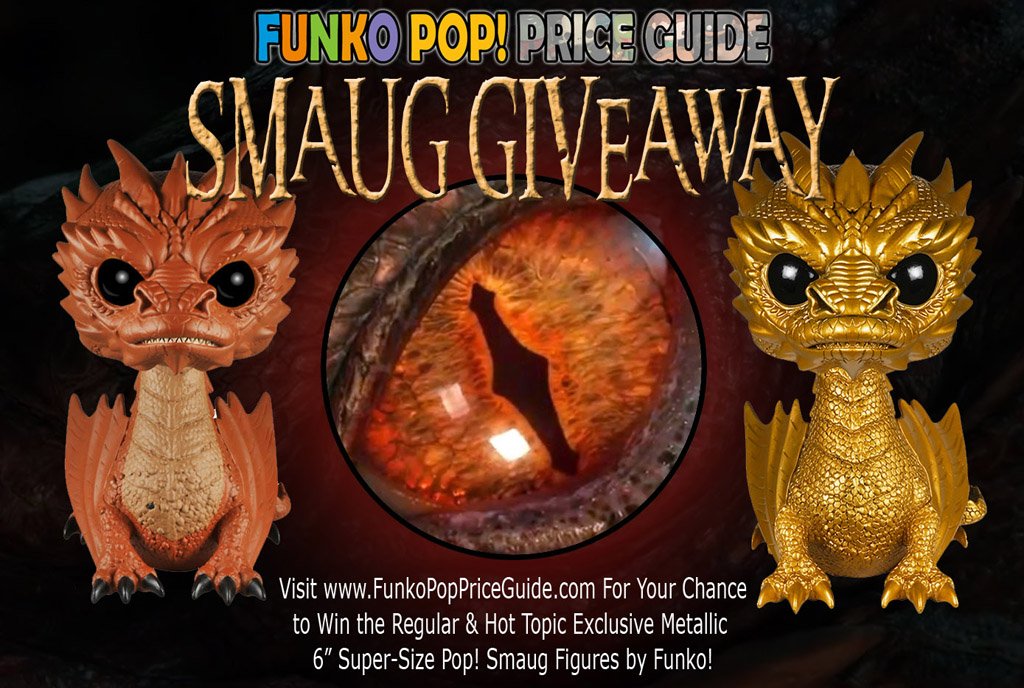 The final chapter of Peter Jackson’s The Hobbit trilogy hits theaters on December 17th. To commemorate the event, The Funko Pop Price Guide is giving away not just one but two different versions of Funko’s 6″ Super Size Pop! Smaug figure! Entering this contest is easy – all you have to do is post in Official Contest Thread and name the One Pop! you want to see Funko produce in any upcoming Lord of the Rings-related series. It’s that easy! The winner’s name will be randomly selected and announced some time on Wednesday, December 17th, 2014. Now, the fine print (in regular size for your convenience).

– The winner of this contest will receive one (1) 6″ Funko Pop! Movies Smaug figure and one (1) 6″ Funko Pop! Movies Hot Topic exclusive Metallic Smaug figure. Each figure is brand new and unopened!
– You must be registered to post, and therefore must be registered to win. Multiple registrations by the same person will be disqualified from the contest and publicly shamed.
– You can post all you want in the thread, but there is only one entry per member.
– All entries must be made by 11:59pm Central Time on Tuesday, December 16th, 2014. Any posts made after that will not count towards the contest.
– The winner will be notified by e-mail as well as publicly on the front page and forum.
– The winner will have 72 hours to claim their prize. If the prize has not been claimed within 72 hours, the winner forfeits the contest and another name will be drawn.
– We will cover shipping in the United States and the first $15 of shipping outside of the U.S.
– Site admin and contributors are not eligible for the contest.

So let’s have some fun and send someone home with a couple of dragons!

One thought on “FPPG Contest #1 – Win a Pair of Funko Pop! Smaugs!”